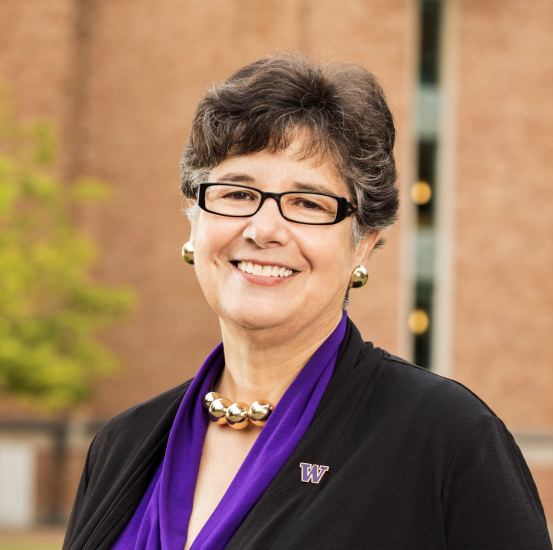 As the head of one of America’s top five research universities – and one where she has worked her entire career – Ana Mari Cauce knows a lot about academic success.

The University of Washington (UW) is world-class in many fields, including medicine, engineering, law, and business. But she strongly believes that to get the most out of the resources and talents she brings together as president, you have to help these experts cross individual or disciplinary boundaries.

One of UW’s best-known scholars was Ben Hall, the late genetics professor who co-created a hepatitis B vaccine. As a biologist in the 1970s, he studied yeast to understand how genes use RNA to replicate. And, as Cauce explains, he achieved his hepatitis breakthrough by working with UW colleagues from different scientific backgrounds in the joint pursuit of medical progress.

Creating a truly interdisciplinary environment, however, is never just a matter of a leader recognizing that this is a good design approach, as many universities talk about breaking down subject silos. Getting there is another matter: faculty can be set in their ways, and institutions often struggle to measure results outside of the tried and tested tradition of departmental evaluation.

However, Cauce says the paradigm-breaking moment of Covid showed him how much progress can be made by bypassing traditions and backward bureaucracies when circumstances demand urgent action.

Yet despite the astonishing success of science and medicine in the fight against the pandemic, she feels that the general public does not really understand how much credit researchers deserve for laying the groundwork and being at the height. “To date, I think we haven’t told enough of the story of the decades of basic research that allowed us to do this,” she says.

The traditional fields of biomedical science, for all their contributions, have not alone prevented millions of Covid deaths; the incredibly rapid development of vaccines and rapid test kits has also required strategies to get them to people and, in many cases, get them accepted.

“We have instituted clinics everywhere,” says Cauce. In the case of the UW and the Seattle community, the practical response also meant practical interventions such as bringing together partners to bring supply trucks to neighborhoods, where they could reach those unable to reach clinics.

“We were really able to bring all of this knowledge together, both in scientific terms but also in terms of policy, in a way that created impact,” says Cauce.

She is determined to draw lessons from this tumultuous period that can be applied more broadly and in the longer term.

“What we’re working to do at the University of Washington is really, in a sense, to rewire this very large, very comprehensive institution in a way that can better provide the solutions to the needs of our world.”

Part of it is acting ‘deliberately’, she says, ‘but part of it is done [differently]: giving a boost to serendipity”.

A major focus of UW is its Population Health Initiative, a 2016 effort to bring together scientists working in human health, social and economic equity, and environmental resilience to study solutions to large scale that are beyond the scope and reach of these individual sectors.

Its projects include identifying and mitigating the factors that worsen the health and shorten the lifespan of minority communities, with a focus on areas such as improving maternal health and protecting urban green spaces. .

Part of this strategy has been the construction of the Hans Rosling Center for Population Health, where researchers from different disciplines are physically brought together to live and work together for long periods of time.

The idea, says Cauce, is to “make sure people from different disciplines talk to each other.”

Of course, such initiatives are not unique to higher education, especially at better-funded institutions, but UW has other strategies to overcome chronic barriers to — or, as Cauce sees them, apologies against – real interdisciplinary environments.

One is to find department heads – deans who are genuinely committed to working beyond their disciplinary boundaries – and to ensure that all their subordinates understand this and are incentivized accordingly. “It’s really about what we value,” Cauce says. “One of the things that really excites me is that we’re very deliberately trying to hire deans who are collaborating, and I think we’ve changed the culture here.”

The other important factor is funding. It would be useful, she acknowledges, for the major national research funders to place more emphasis on societal issues and scientific paths that require and nurture collaborative perspectives.

But in the meantime, UW is doing it all on its own. “One of the things that’s been really effective here has been creating these little grants that pay for someone outside of your field,” Cauce says.

Examples include a psychologist proposing a mental health study who is offered a $100,000 (£93,000) grant from university resources if the work includes someone from the School of Public Policy, who could translate the results into an implementation program.

“We did this internally. It would be wonderful if we had those kinds of grants at the federal level,” the UW president said.

The overall strategy includes a realization that efforts to promote a greater interdisciplinary mindset should not be viewed solely as something for early-career scholars whose priorities may be more easily driven by threats and tenure and promotion awards.

Longer human lifespans, with professors regularly working past age 65, mean academics “spend most of their lives after being full professors,” Cauce says.

Any administrator who backs down from promoting interdisciplinarity because they see tenure and promotion practices as too immutable is not only mistaken but looking in the wrong place, she argues. According to her, it is too easy to adopt this mentality “as an excuse” to act.

Cauce grew up in Miami after her family emigrated from Cuba and earned her undergraduate degree in English and psychology at the University of Miami, before earning her doctorate in psychology at Yale University. She joined the UW faculty in 1986, became provost in 2011 and president in 2015.

Cauce recently co-edited and contributed to Universities as a fifth power? Opportunities, risks and strategiesa book that brings together some of his ideas to put academic science more clearly at the service of society, especially in times of crisis.

Its title refers to the idea that universities should be understood – alongside the classic American notion of the three branches of US government and the media – as a central force in promoting change for the public good.

Referring to her doctoral supervisor at Yale, Edmund Gordon, who founded the Head Start preschool program, she says, “He always taught me to look for the best in people, to try to find ways to connect with people.

“We live in a world where too often we view people who disagree with us as enemies to be defeated, rather than potential allies to be won.”

This is part of our “Talking leadership” series of 50 interviews over 50 weeks with leaders from the world’s top universities on how they solve common strategic problems and implement change. Follow the series here.