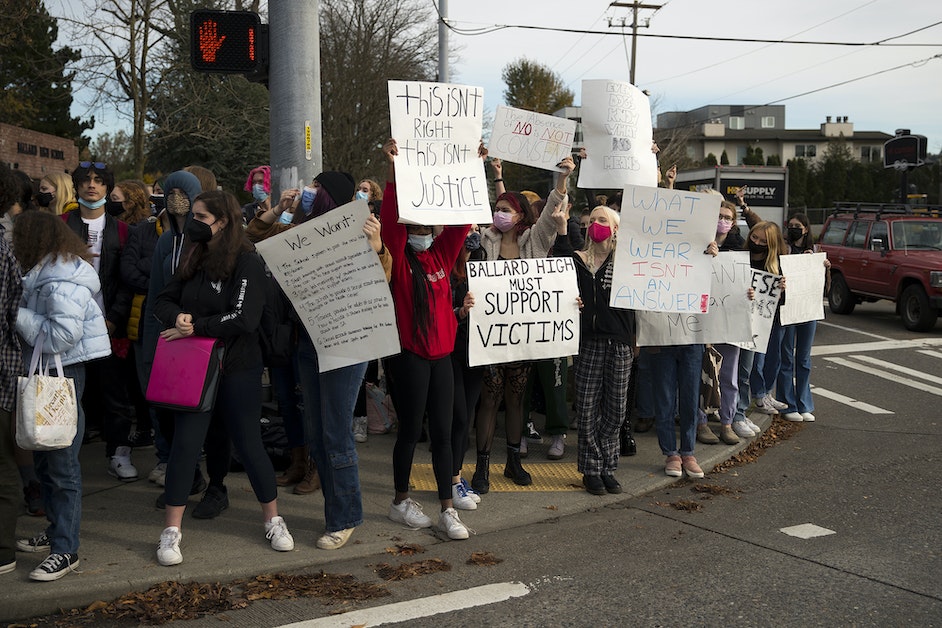 About 100 students left Ballard High School on Monday afternoon to protest the lack of accountability for sexual misconduct and harassment at school.

â€œOn Friday I saw an abuser in the library and he smiled at me,â€ said Rosa Basiji, a junior at Ballard High. â€œI went into a bathroom with a bunch of friends, and I was really upset and we talked about protesting. I went back to class and just started having a panic attack.

The protest follows a string of incidents dating back to 2018, when a student was charged with sexual assault. Citing a lawsuit, the Seattle Times wrote that the student coerced a classmate into a sexual act in a school bathroom.

In October, principal Kevin Wynkoop wrote parents an email warning them about “spodies” – parties named after some sort of punch mixed in a large bin. Spores are strong drinks that, Wynkoop warned, are likely to be associated with “roofies” – drugs to further reduce a person’s inhibition.

“The idea that people can drug other students at these events is frightening and makes them even more dangerous,” he wrote. â€œPlease tell your students about the horrible nature of the rooftops. “

Attached to that email was a picture of a flyer in the hallway. The flyer read: “There have been numerous reports of rooftops leading to sexual assault and rape of spies, please remain cautious and aware.”

Basiji, the student, said the school has organized forums to discuss these issues.

â€œRecently we had one, and ASB (Associated Student Body) said there are going to be changes coming, but we just wanted to have this demonstration to show how upset we are. Because we feel that we are not actually being heard or seen.

A change.org petition includes anonymous posts from students complaining about unwanted male attention – cases of teachers failing to step in when older students have become “tinkerers” with younger female students, or got stuck in the hallways.

On Monday, after the protest, Principal Wynkoop sent parents a second email. He began by saying that he supported the right of students to protest.

â€œResponding to sexual assault is sometimes complicated,â€ he said. “The vast majority take place outside of school and therefore fall outside our jurisdiction to investigate and discipline.”

He said the school was making a police report, contacting the parents and supporting “the victim in various ways,” he said.

â€œI understand the difficulty survivors of sexual assault have seeing their abusers in school and I can’t imagine having to deal with this trauma over and over again. (Scroll down to read the entire Wynkoop email.)

During Monday’s protest, Nicolo Potesta, a junior, said that while these issues have received attention, it seems not enough has happened.

â€œWhen we heard the school make more of these empty promises, we knew we had to do something bigger to show that we weren’t going to be appeased by promises of action without actually taking action,â€ said Potesta.

â€œIn the school newspaper, The Talisman, we ran a journal like five years ago that focused on rape culture, and we were still talking about the exact same things that we are talking about today.

I am writing to you today to inform you of a student protest that took place at school this morning and early afternoon. The students organized the demonstration of support for victims of sexual assault and the school district’s process in dealing with reports of sexual assault.

Responding to sexual assault is sometimes complicated, since the vast majority takes place outside of school and therefore falls outside our jurisdiction to investigate and discipline. In these cases our goal is to report to the police, contact the parents and support the victim in various ways, depending on what they report would be helpful. I sympathize with the difficulty for survivors of sexual assault seeing their abusers in school and I cannot imagine having to deal with this trauma over and over again.

Our school district also supports our students in exercising their First Amendment rights. The district has been working on changing the Title IX reporting procedure, as required by federal law, and that work is expected to be handed over to the school board next spring. It sounds like a long time, but it is important that this work is thoughtful and precise. It is important to note that the working group has a student voice subcommittee and has worked with the students to ensure that their voices are part of the conversation as the procedure is changed.

I feel fortunate to be part of the school community that prioritizes student voices and I am proud of our students today. Even when I was at the center of their anger, I was happy to see the way they came together to support each other. No one should feel pressured to take such steps and we should all fully respect the rules of consent and respect those around us.

Our next step is to organize a 2nd student forum on Wednesday November 17th from 2:40 p.m. to 4:00 p.m. in our performing arts center. I will be there and I will be accompanied by representatives of the SPS Student Civil Rights Office and other school staff to listen and answer questions. They will also conduct staff training that day to ensure staff are clear on how to receive student complaints and forward reports to administration for follow-up.

If you have any questions, please do not hesitate to contact me.