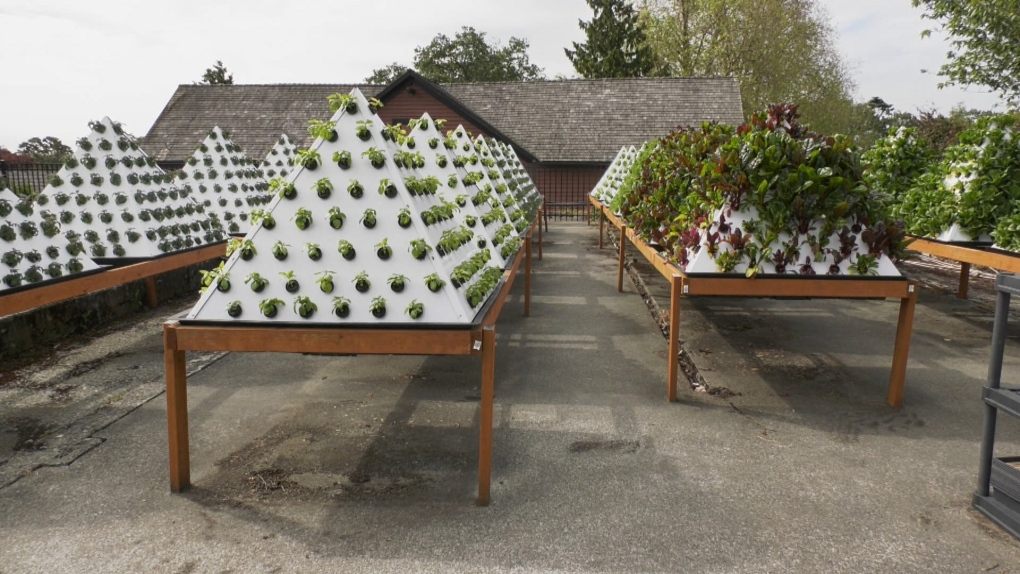 You could call it a literal pyramid scheme: 28 physical pyramids set up on the grounds of Government House in Victoria.

Unlike a metaphorical pyramid scheme, however, the people behind these pyramids are not trying to get rich. They try to feed those who need it.

Each of the 28 pyramids contains 136 plants, which the Harvest and Share Food Society distributes to local food banks when ripe. When the weather cooperates, the group harvests up to 600 plants a week.

“The City of Victoria’s Get Growing Victoria program provides the seedlings for us,” said Allan Murr, president of the company, which first engineered the pods on the back of a towel 10 years ago.

The patented pyramids give plants a healthy dose of nutrient-rich water every hour.

“The water drips into our bins and goes back into our reservoir and (is) reused,” Murr explained.

He first started a business with his design, growing 15,000 basil plants at a time.

“I was kind of nicknamed the basilisk man at that point,” Murr said.

Unfortunately for him, the idea didn’t really catch on.

“(It was not) well received; maybe ahead of its time,” he said.

Murr – whose background is in IT – took a break from the basil business and put the pods into storage. But when the pandemic hit, he started thinking about how he could use them again.

“(Victoria City) Councilor Ben Isitt was talking about food safety and I was just thinking, ‘I have these pods in storage and they should be used for something,'” Murr said.

A team of volunteers – including Murr and his daughter – maintain the plants and distribute them throughout the city.

One of the places they deliver their wares to is the Quadra Village Community Center food sharing program, which sees 1,000 people a month seeking help.

Kelly Greenwell, executive director of the center, appreciates the work done by the Harvest and Share Food Society.

“People like Allan who seek out opportunities to give back to the community and recognize the needs around them are so essential right now,” Greenwell said.

“We have about 20 of them on the Microsoft campus in Seattle, where they grow food for their employees,” Murr said.

He hopes this time around the pods will catch on and help more people gain access to fresh food.

Brown v. Board of Education is absolutely not sure!