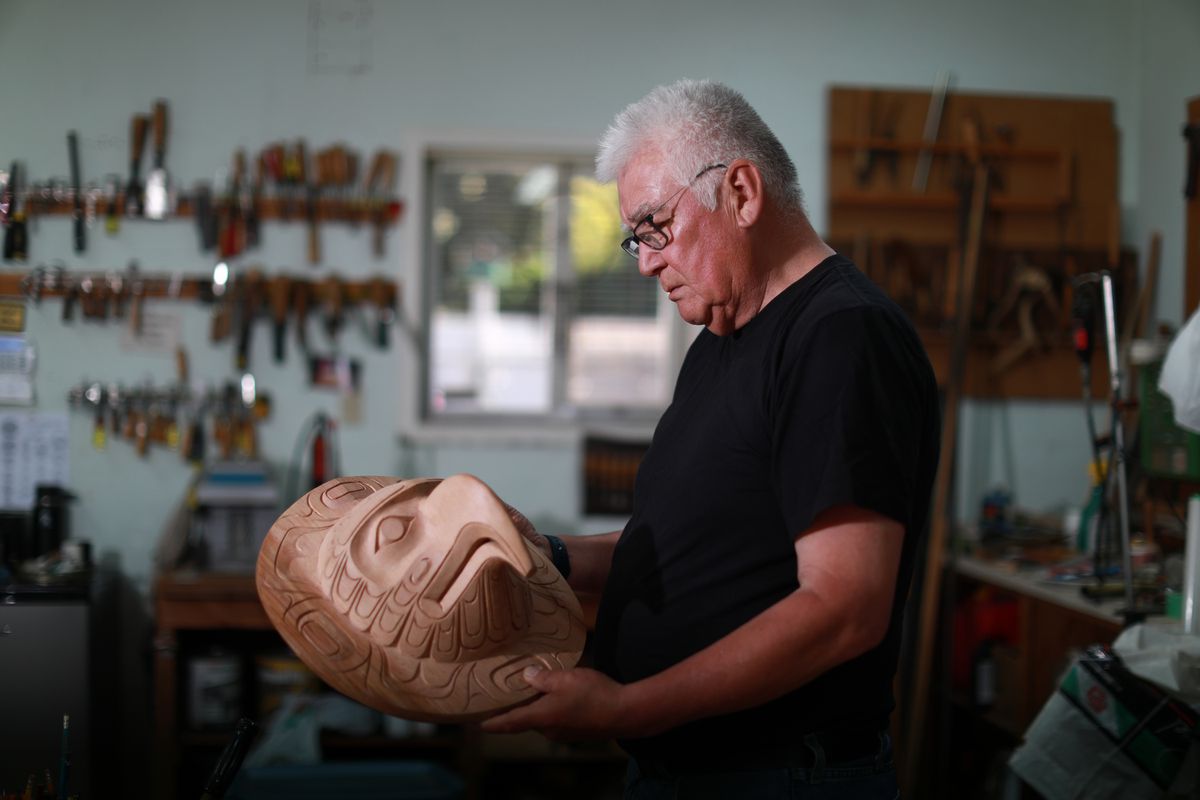 First Nations art, from hand-carved masks to totem poles, draws on generations of tradition and skill and can take months to craft.

But a flood of counterfeits and commercial forgeries produced in Asia and Eastern Europe are exploiting indigenous culture, artists say, and stealing income from them.

One of the well-known Aboriginal artists whose images are reproduced without permission is British Columbia sculptor Richard Hunt.

“I stopped people from making postcards of my work that I discovered. In Bali, Indonesia, they make Northwest Coast Masks. They sell them as natives,” he said.

“These things need to be stopped. We need government help. It’s like the dream catcher from Taiwan or China. Buyer beware.

The federal government is facing calls for action, including from a senator who wants copyright law reform, a unit to help Indigenous artists track down counterfeits and strengthen border controls for native style art.

Mr Hunt said increasing tariffs on imports of copies could slow them down, but he said counterfeits were being mass-produced, undermining genuine Indigenous artists and making it harder for young First Nations carvers to make a living in what he called $1 billion. industry.

Senator Patricia Bovey, the first art historian to serve in the Senate, said the fake Indigenous art industry can be worth millions of dollars and violates artists’ intellectual property rights.

She lobbies the government to reform copyright law to better protect Indigenous artists from unscrupulous companies reproducing their images without their knowledge.

Unauthorized and counterfeit Indigenous works range from reproductions of First Nations art on t-shirts, bedspreads, bowls and plastic bags, to carved masks and totem poles made from wood grown in Asia from the South East.

Many of them are near exact copies of original works in galleries in Canada and the problem is acute with West Coast art.

Bovey wants ministers to set up a unit to help Indigenous artists whose work is being reproduced without their knowledge track down and root out those who have infringed their copyright, at least so they get paid.

Not only are Indigenous artists having their creations stolen, she says, but people who buy Indigenous works in Canada and abroad may not know they may be fake or were produced without permission. of the artist.

Ms Bovey was shocked to find that some images on orange t-shirts made following the discovery of unmarked graves last year have been reproduced without the artists’ knowledge by for-profit companies, not collecting fund for aboriginal causes.

She cautions buyers of Indigenous artwork to ask before buying where the artwork is from, if it was made with the artist’s permission, and if the artist is being paid.

“It’s a really serious problem,” she said. “It’s plagiarizing the work, it’s appropriating the work and both are wrong and the artists do not have the means to fight all this in court.”

Helping Indigenous artists get their copyrights back would be an example of “reconciliation action,” the senator added.

She wants an upcoming review of the Copyright Act by Heritage Minister Pablo Rodriguez and Innovation and Science Minister François-Phillippe Champagne to include protections for Indigenous works, which she says are an integral part of Canadian culture and history.

Not only should there be specific safeguards for artists, but a mechanism to track down companies making indigenous works or not paying artists’ royalties, including in China and Eastern Europe, she said. declared.

“We all have a responsibility in this regard. We need to find ways to support artists who are maligned in this way to have legal funds,” she said.

He said “Indigenous peoples and artists will be consulted in the process.”

Current copyright law provides protection for Indigenous artisans and women, including Inuit carvers and jewellers, but Bovey said the process is so complex and time-consuming to pursue that few artists have time to pursue it.

She also wants tighter border controls and investigations into the provenance and destination of art in Canadian Indigenous styles, especially made from wood that is not native to Canada.

According to Lucinda Turner, an apprentice of Nisg’aa carver and totem pole carver Norman Tait, fake masks and Indigenous carvings have been openly sold to tourists in Vancouver as genuine.

Ms Turner, who died this week, spent years documenting, tracking and challenging fraudulent Indigenous works claiming to be genuine, and lectured on the subject.

Ms Hunt said she had done a lot to draw attention to the illicit trade and had helped many Indigenous artists claim their copyrights.

In an open letter to the government last November, Ms Turner said more than 1,000 appropriate images had been removed after she and others wrote takedown letters supporting artists whose copyright had been infringed .

Speaking at the Burke Museum of Natural History and Culture in Seattle, she said a few copied mahogany carvings looked so authentic they hung in Canadian galleries.

Among the forgeries she has identified are reproductions of 19th century sculpture in major museums, such as a beaver rattle from the British Museum, and copies of works by contemporary North West Coast artists, including the famous sculptor Bill Reid.

She lobbied the federal government for greater protection for Indigenous artists, calling for legislation, like in the United States, with huge fines for the sale of Indigenous works that are not authentic.

The US Indian Arts and Crafts Act criminalizes the misrepresentation and copying of Native art. There is also a fake art hotline south of the border to make it easier to report unauthorized copies.

In the open letter to the federal government, she called for action to combat misrepresentation in the online marketplace.

Well-meaning shoppers trying to support the Orange Shirt movement were tricked into buying clothes from which indigenous people would gain nothing – including the artists whose images had been used, she said.

The movement of missing and murdered Indigenous women and girls has also been exploited by lucrative companies making handbags, t-shirts with Indigenous imagery without permission from the artists, she warned.

The internet has led to the mass marketing of fraudulent, copied or stolen images of art and ceremonial artifacts by companies unrelated to Indigenous artists, she said.

Ms Bovey, who says she plans to raise the issue again with ministers when the Senate returns from its summer recess, said few realize that Indigenous art for sale in Canadian stores could be manufactured in China, Eastern Europe and Taiwan.

The Canada Border Services Agency said there are currently “no import restrictions related to items that imitate Indigenous art.”

Our Morning Update and Evening Update newsletters are compiled by Globe editors, giving you a concise summary of the day’s most important headlines. register today.