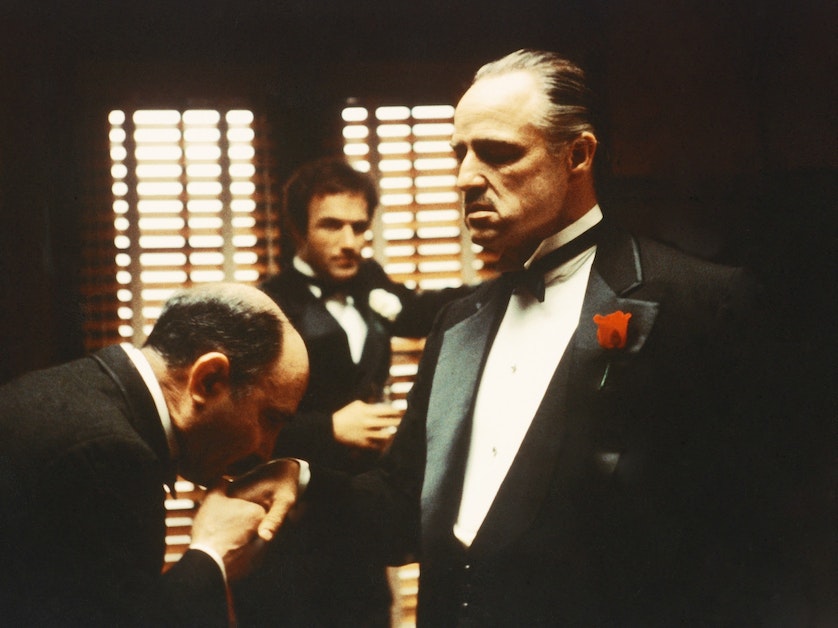 How ‘The Godfather’ Used Italian Culture to Reimagine Mafia History

The first time I saw Don Corleone from The Godfather was not in a movie theatre. It was on Saturday Night Live.

John Belushi did an incredible Marlon Brando impression as Corleone, and he was playing the Don during a group therapy session with Elliot Gould as his therapist. Laraine Newman was decked out in a blonde wig and Valley Girl accent for SNL’s first-season skit, dubbed “The Godfather Therapy,” telling Belushi’s Corleone, “please reach out, guy!” (One of my favorite lines from this skit: “Now the Feds are watching me…investigating me. The ASPCA is suing me about that horse thing…”)

It was a measure of how much The Godfather had permeated pop culture already in 1976. Even an 11-year-old black kid watching TV in Gary, Indiana knew the mob boss who made deals to people who they couldn’t refuse.

A few years later, when I saw the film, I was captivated. Not only because the film offered an explicit look at the power and violence of gangster life – the scene where James Caan’s Sonny Corleone was punctured by dozens of bullets at a tollbooth gave me nightmares for a good moment – but because The Godfather showed us a very specific family at a very specific time in a very specific culture.

It was obvious from the very first line of the film. “I believe in America,” says Amerigo Bonasera, a bald undertaker from post-war America who tells the story of a hard-working immigrant, trying to stay out of trouble and build a life for his family. Until American justice fails him, and he must seek help from a man whose power transcends all legal authority.

Little did I know it then, but The Godfather was setting a pattern of authenticity in film that would affect the careers of everyone from Martin Scorsese and The Sopranos creator David Chase to Spike Lee and even, perhaps, young talents like the creator of Atlanta, Donald. Fifty years ago, Glover and Ramy co-creator Ramy Youssef, The Godfather helped prove that authenticity makes a movie better. That casting a big name in an epic movie wasn’t nearly as important as choosing the person who best inhabits the character.

And making the audience feel like they were watching a mafia story rooted in Italian immigrant culture, which had an imported code from the old country, helped to humanize the characters and make us care for them even more. I had never met Italians from New York or the East Coast. But I felt I learned a bit about the rhythms of their culture by watching The Godfather, even as the film sparked a debate about whether its portrayals of Italian Americans were harmful stereotypes.

Along the way, The Godfather has created archetypes for telling mob stories that have inspired some of the best movies and TV shows of the modern era.

“We are going to make an image that is going to be Sicilian at heart. You can smell the spaghetti.” It was Robert Evans, who was head of production at Paramount Pictures in 1972, explaining in the film version of his memoir The Kid Stays in the Picture why they hired Italian-American director Francis Ford Coppola to direct The Kid. Godfather, with a mandate to bring authentic culture to the film. According to Evans, gangster movies had failed in the past, in part because the studios of actors like Kirk Douglas – performers who didn’t look the part or know the culture (Douglas had, in fact, starred in a bomb of a gangster movie for Paramount in 1968, The Brotherhood, cited as the reason the studio hadn’t made a mob movie in years). Indeed, when Coppola, writer Mario Puzo and producer Al Ruddy were working on the film’s casting, non-Italian actors like Laurence Olivier, Ryan O’Neal and Robert Redford were touted as possibilities for casting – thought old school from a different time.

These days, we take it for granted that Mafia movies and TV shows are filled with Italian-American culture, made by Italian filmmakers and actors. We saw Robert De Niro and Joe Pesci in Goodfellas; De Niro in Mean Streets; James Gandolfini leads a whos who of Italian and Italian-American actors in a TV show considered one of the best series ever made, The Sopranos. in two ways. First, you get to know a subculture you may not be familiar with, drawn in by seeing the kind of people you may never meet in real life reveal themselves from a way they probably never would in person. If you know the subculture, you’re drawn to the identification with the story – assuming the storytellers capture the details well. Secondly, there is always a human dimension that goes through this cultural specificity with which everyone can identify. John Singleton’s 1991 film Boyz n the Hood tells an authentic story about young black men facing gang violence and poverty in South Central Los Angeles. But it’s also a coming-of-age story about young people choosing their path in life and dealing with the consequences of their choices – something a lot of people can relate to. For me, watching The Godfather brought out both of those thrills. See the bright pageantry of Connie Corleone’s marriage, contrasted with the dark relationships of her father The Don – who must heed demands made at his daughter’s nuptials. Hear loyal assistant Clemenza rant about the right way to make pasta with meatballs for a house full of family soldiers, hidden in the middle of a gang war. See the rituals of baptisms and weddings compared to the murders necessary to ensure the family’s success in crime. The very particular story of a Mob family, juxtaposed with the classic tale of an aging patriarch who wonders who will succeed him. And his horror when he realizes that the son who was his golden child – the one who is able to find rightful success in the world outside of their crime family – is the only one who can take his place.

As compelling as this story was, many groups feared that The Godfather was only amplifying stereotypes about Italian immigrants and Italian Americans. Even before filming began, the project was criticized by a group called the Italian-American Civil Rights League, led by notorious gangster Joe Colombo.

(The Offer, a limited series on Paramount+ about the making of The Godfather, details how producer Ruddy brokered a truce with Colombo – played with blunt impatience by Giovanni Ribisi – by agreeing to have the word “Mafia” removed from the script. of the movie.)

Protests against the franchise have continued to the present day, with the Italic Institute of America criticizing screenings of The Godfather: Part II at an Illinois theater in 2019, saying the film embraces stereotypes about Italian crime that have existed in America for hundreds of years. On the other hand, author Tom Santopietro argues in his book The Godfather Effect, that the movie trilogy removed more stereotypes than it encouraged – crushing the notion of Italians as uneducated, heavily accented idiots. .

I remember talking to a TV writer friend about issues like this years ago, when shows like The Wire and The Sopranos drew complaints from groups with valid concerns about how the show could stereotype black people or Italian Americans. The TV writer then replied that creators’ best defense is to make sure their stories are centered around three-dimensional characters making decisions consistent with their perspectives, humanizing them. So in The Godfather, you’re not watching a stereotypically violent gangster just ordering someone to kill; you see Al Pacino’s Michael Corleone get rid of the brother-in-law who regularly beats up his sister – and colluded with a rival family. The Godfather also provides a manual on how to elevate anti-heroic characters above villains. Marlon Brando’s Don Corleone is a man with strong values: he builds a network of “friends” with whom he exchanges favors. We don’t see him shaking traders for protection payouts or breaking players’ legs to get their debts paid off. Additionally, displaying signals often used to sort out anti-heroes from villains for the public, The Don opposes drug trafficking and does not reflect the racism of the times. He’s a rival gang leader who says he doesn’t mind allowing drug dealing in neighborhoods where black people live, because “they’re animals anyway, so let them lose their souls.” It’s no wonder the massive success of The Godfather – and its recasting of a Mob family as a clan facing Shakespearean drama and epic challenges – reshaped the way Mafia movies were told. By the time The Sopranos rolled around some 27 years later, creator David Chase was pushing back on the innovations in The Godfather that have become tropes – revealing that his mob boss Tony Soprano was a ruthless, womanizing, sometimes psychopathic racist, despite all his talk about family. old school values ​​and loyalties. Fifty years after its blockbuster debut, The Godfather still casts a shadow over storytelling in TV and film, fueled by its marriage of the classic gangster story with family drama, immigrant journey and plenty of culture. Italian. It’s a film that reinvented the way we all see the Mafia, proving that cultural authenticity is often the most powerful tool a storyteller can use. [Copyright 2022 NPR]