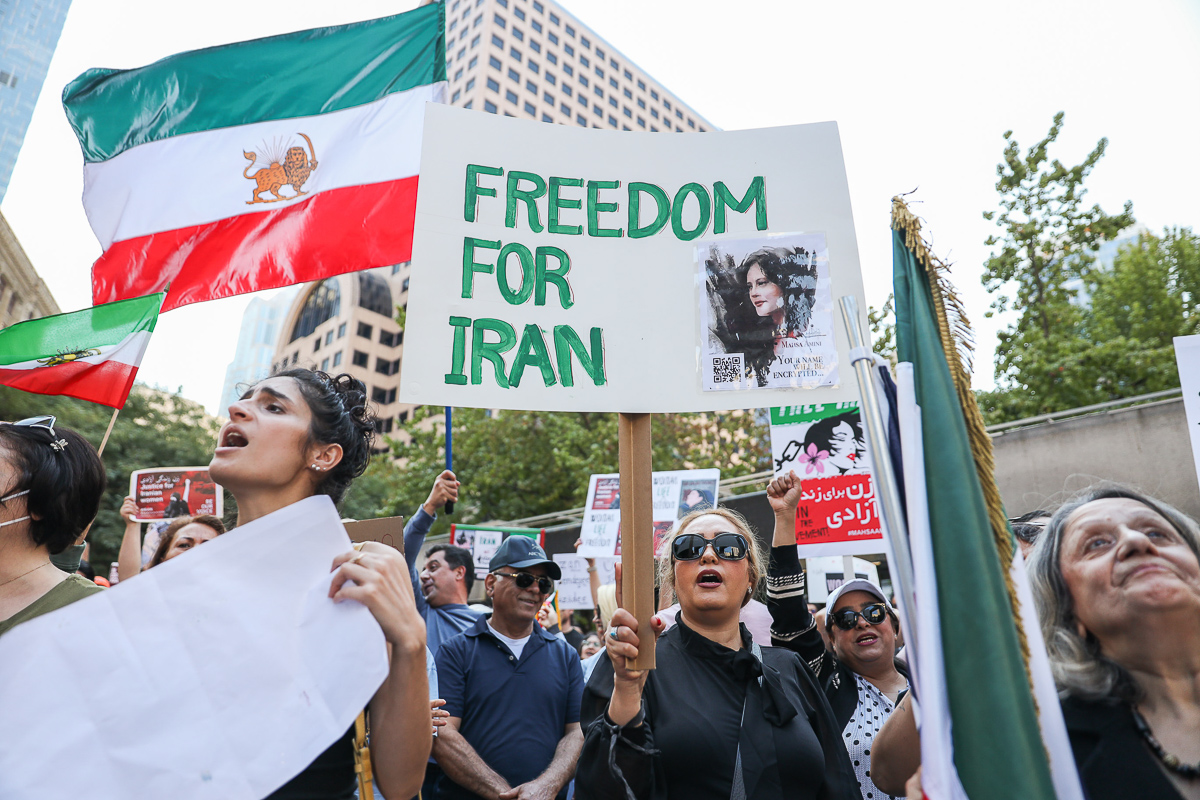 The Seattle Globalist was a daily online publication that covered the connections between local and global issues in Seattle. The Emerald continues its legacy of showcasing our city’s diverse voices by regularly publishing and reposting stories aligned with the Globalist’s mission.

The Iranian people have been protesting against their dictatorial government for three weeks, and here in Washington, members of the Iranian diaspora are making their voices heard. As the people of Iran protest, so do their friends and family in King County. For the first time, on Saturday, October 1, more than 1,000 Iranian Americans and their community allies gathered in Westlake Park in downtown Seattle for a rally and march.

Protests in Iran began three weeks ago when 22-year-old Mahsa Amini was beaten by ‘morals police’ for wearing her hijab improperly. Mahsa Amini died of her injuries, and with her death, the Iranian people have reached breaking point.

Dena, from Iran, has been in Seattle for three years. “This is by far the biggest demonstration after the revolution in Iran. In Iran, every town, village, even small towns are protesting what happened in the past 43 years after the revolution. They demand justice for all women and all men. … The solution is a free country without mullahs, without ayatollahs, without Islam. Religion should not be compulsory. It’s freedom, you can choose what you believe,” she said.

An Iranian, Navid, came on stage with his Iranian passport and a pair of scissors. Angry at the treatment of women in his native country, Navid cut his passport to pieces on stage while carrying a neatly folded American flag over his shoulder. “We have to change the regime in Iran now,” he said. Asked about his passport, Navid replied, “It’s not our passport; they choose everything for us. This is not for me; it’s not for anyone.

Speakers led the rally in song as a young Iranian woman danced on stage, her long hair flowing freely in both defiance and celebration. Chants in Farsi, Arabic and English echoed through downtown buildings as people in the crowd held up signs showing their support for women and denouncing Ali Khamenei, Iran’s current supreme leader, in power for 43 years.

Boshra, an 11-year-old US citizen and refugee from Iran, explained why she was at the protest. “The reason I came to the United States, in the most minimalist way, was Mahsa Amini, which is the name of the girl who was beaten to death for [having] some of her hair out of her scarf. … She’s not the only one who lost her life for not having a choice in her body,” she said. “Women, men, LGBTQ+: None of us want this diet. It is a dictator’s regime, and we have become one voice to say that we do not want it. We are here to be the voice of the voiceless in Iran, my sisters and brothers who are being killed. … One of the things we were shouting was ‘Silence is violence’, because it is. We want freedom for Iran, basic human rights.

One of the protest organizers, Somaye Dadgari, is Iranian but has been in the Seattle area for seven years.

“We’ve been through a lot over the past 43 years. … We want a revolution, there is no other option. people inside [Iran] started protesting, they were beaten and shot, so we will be their voice and we will not stop,” Dadgari said. “We have this protest every night in Bellevue from 6-8pm. We will continue until the regime changes, that’s the only thing we want.”

As the rally grew and began to spill out into the streets, Seattle police arrived on the scene and guided the protest as it marched from Westlake to Pine to 1st Avenue to Pike to to 3rd Avenue and back to Westlake, where the crowds began to disperse.

📸 Feature Image: More than 1,000 Iranian Americans and their community allies gathered in Westlake Park in downtown Seattle for a rally and march. (Photo: Alex Garlande)