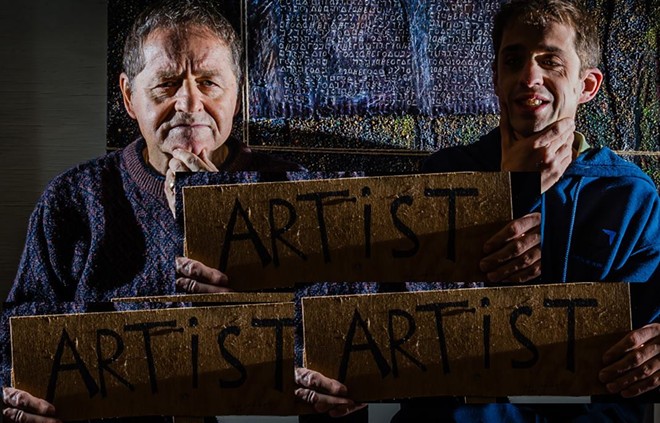 Richard “Dick” Ibach made an impression for many reasons: his vibrant and quirky paintings, his long career as a mentor, his harmonica playing and above all his humor. Ibach passed away in late 2021, and while his family is still working on the latest plans, local artists and educators who knew him shared some fond memories of him.

Artist Kay O’Rourke met Ibach in a painting class at Gonzaga University in the 1970s, when minimalist, conceptual, and abstract expressionist art was all the rage. Ibach’s work, however, “was a narrative form that spoke of his life, his fears and his hopes,” says O’Rourke.

For many artists in our region, Ibach was their first art teacher. After earning his Masters of Fine Arts from the Pratt Institute in New York in 1972, Ibach taught in New York, as well as at Spokane at Gonzaga Prep and Ferris High School. And at Spokane Falls Community College, where Ibach taught for over 20 years, he influenced generations of artists.

Ric Gendron was a few years older than most of the students in Ibach’s painting class at SFCC in 1985-86 and appreciated the thoroughness of the experience.

â€œAlthough Dick Ibach was an easy-going guy with a great sense of humor, he was not easy and very serious when it came to painting,â€ says Gendron (Colville / Arrow Lakes), a prolific painter which exhibited abundantly in the northwest. â€œI’ve always loved his whimsical workâ€¦ the spontaneity and the feelâ€¦ I was happy to have him as my first serious teacher.

Bradd Skubinna also met Ibach at SFCC and remembers him as being quite calm, with a gentle demeanor in class, which nonetheless made a strong impression on Skubinna.

“It was the first teacher I had ever had where I was like, ‘Oh, he’s an artist!'” Says Skubinna, who started teaching at SFCC shortly after Ibach retired. . “My knowledge of contemporary art was VERY limited at this age, so [Ibachâ€™s] the work marked me. ”

MacKenzie Hawley, a retired SFCC art teacher, worked alongside Ibach for 11 years and thanks him for helping her develop as a teacher.

â€œWe talked a lot about color and a lot of what I learned was from Dick,â€ says Hawley, who has also taught at EWU, CCS, Spokane Art School and several high schools in the area.

Her appreciation for Ibach’s mentorship goes beyond her professional career, Hawley says, as she has a personal connection to him as well.

Hawley’s son Ryan had Ibach as a teacher while he attended SFCC as part of its Running Start program for high school juniors and seniors, and loved Ibach’s “wonderful, fun way to teach.”

â€œRyan went to Cornish College of the Arts in Seattleâ€¦ he always said Dick Ibach was his all-time favorite teacher,â€ Hawley said. She adds that Ibach was “a good human, a great artist, a great teacher and a friend. He will be missed.”

You can view some of Ibach’s work on the Arts WA website.

Report cites culture of ‘fear’ at academy for judicial officers