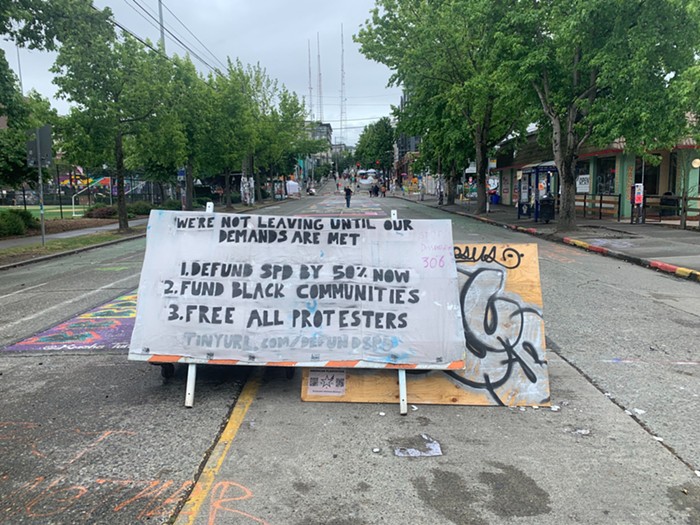 This is what 10th and Pine looks like now. J.K.

Earlier this morning, the Seattle Department of Transportation (SDOT) marched through Capitol Hill Occupied Protest (CHOP), removing concrete barriers that once stood along 10th Avenue, the westernmost edge of the zoned.

In a meeting Along with Converge Media’s Omari Salisbury, Diaz said the SPD had no current plans to remove the barricades further up Pine Street, closer to the Eastern Quarter. “Right now we’re just trying to remove those and then we can assess what our equipment may contain,” he said.

The discussion about removing barriers began before the early Monday morning shooting that left a 16-year-old and 14-year-old boy died in hospital after the couple reportedly walked through CHOP on Sunday night. The SPD claimed that today’s action was not the result of this incident.

Diaz went on to say that the SPD were not “in full discussion” regarding a way back to the East Ward, but were simply making sure they had open roads and had the ability to offer people “the necessary services as there are a lot of people in crisis in and around this area.” In the same live stream, SDOT Director Sam Zimbabwe also pointed out that they do not have the intention to remove the barriers in front of the compound today. The new barriers consist of trash cans, wooden panels and a fryer. J.K.

After SDOT moved the barricades, protesters set up a makeshift barrier of trash cans, fencing, furniture and a fryer along 10th where the cement mixers were. CHOP organizer David Lewis told me that these objects are not necessarily intended to stop a vehicle, but rather to protect the Black Lives Matter mural which has not yet been properly sealed. If traffic is allowed there now, the paint will peel off.

This is what 10th and Pine rn looks like. SDOT came to remove the concrete barriers. This piece of furniture is there to protect the BLM mural which has not been properly sealed for regular street use. #CHOP pic.twitter.com/i0KTB978dw
– jasmyne keimig (@jasmynekeimig) June 30, 2020

In addition to SDOT activity this morning, Seattle Parks and Recreation also announcement that Cal Anderson will be temporarily closed beginning at noon today to allow city crews to “assess the damage and clean up areas that have seen heavy trash collection.” In a press release, they say no changes will be made to the community garden or the art installed by protesters in the park “at this time.” They go on to say that barring an incident, the SPD should not be at Cal Anderson. Here is their full statement:

Seattle Parks and Recreation (SPR) is temporarily closing Cal Anderson Park to the public at noon today to allow city crews to assess damage and clean up areas that have seen heavy litter collection. At this time, no changes will be made to the community garden or the art installed by the protesters.

The City’s goal remains to create safe spaces for residents to exercise their First Amendment rights, while maintaining the public safety and public health of the area. The goal is for Cal Anderson to be restored and repaired for future demonstrations and other park uses. SPR will begin repairing damage caused by newly created fire pits, graffiti, fences, vehicles on the reservoir, impacts to lawns and playground, and other infrastructure.

Today, staff will focus on waste disposal, park assessment and critical reservoir infrastructure to see what larger cleanup or repair efforts will need to take place in the coming days. As of last Tuesday, city departments including SPU, SPR, the Department of Social Services, as well as service providers, have been on hand to provide a wide range of social services to help people with needs to leave the Capitol Hill area, and if they are homeless, provide access to shelter or temporary housing (services include: health care, food resources, access to COVID testing -19 and mental and behavioral supports).

Over the weekend, artists and protesters began cataloging and removing plywood to preserve art for future installations. Seattle Parks and Recreation and the Office of Arts and Culture will work with a range of stakeholders to commemorate aspects of community events, such as a garden, artwork and speakers’ corner at Cal Anderson Park .

Unless there are incidents, the SPD should not be at Cal Anderson Park.