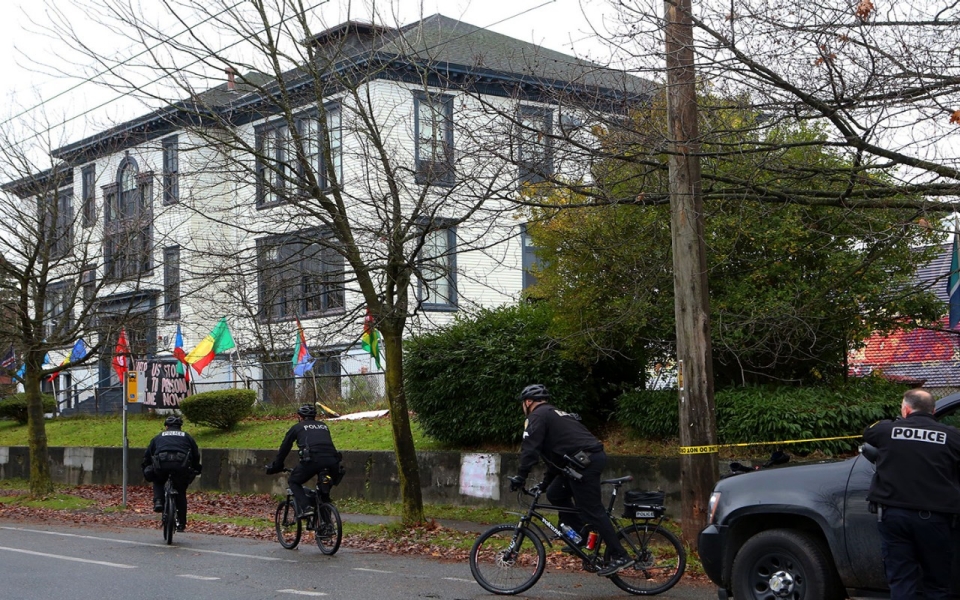 Four men were arrested for trespassing on a Seattle school building where their organization taught a cultural program to African-American students, police said Wednesday. They were released hours later, vowing to continue their work to close what they call a racial success gap in education.

Seattle Public Schools (SPS), which own the Horace Mann building off campus, said they wanted to renovate the facility and called the police because some members of the organization refused to leave.

The four people arrested are part of an organization called Africatown, as part of a nationwide community development initiative. In Seattle, Africatown says it aims to transform the historically black Central District into a vibrant cultural hub. The group says its goal for Horace Mann, who is located in the Central District, was to provide quality education that addresses the history and culture of African American students who attend public schools.

â€œWe want a correct program. We don’t want this European colonial narrative, â€Omari Tahir-Garrett, a historian who was among those arrested at the school Tuesday, told Al Jazeera. â€œThe problem is, it’s a colonial program that doesn’t teach the truth about indigenous peoples, or how they took us from Africa and brought us here.

â€œIt doesn’t work for African American children,â€ he said. “Our children are in the streets, kicked out of the school system.”

Africatown had provided summer enrichment programs to the Horace Mann school building since the start of the summer, using the facility under an agreement with another community organization that leased the building to SPS.

SPS said it rented the building from the organization, but decided to renovate it and use it for a planned alternative school program.

â€œWe warned all organizations six months in advance that they had to leaveâ€¦ and everyone left on August 1 except for one group of people, the Africatown group,â€ said Teresa Wippel, porte – SPS speech, to Al. Jazeera.

In every SPS lease, Wippel said, there is a clause stating that the school system reserves the right to take back the building if necessary.

At the request of the SPS, police entered the Horace Mann building on Tuesday afternoon and arrested the four Africatown men for criminal trespassing, said Mike Jameson, spokesperson for the Seattle Police Department.

â€œThe people inside were there against the owner’s will. They were asked to leave, but they refused, â€Jameson told Al Jazeera.

He added that the department had information that led officers to believe the men inside might be armed, prompting the department to send its tactical team to make the arrests. No weapons were found, Jameson said.

â€œThey threw us the SWAT team on nothing. The same mainstream press that blew up the story (on guns) had to tell the truth and admit that there wasn’t one, â€Greg Lewis, an Africatown supporter who stands behind Al Jazeera, told Al Jazeera. was inside the building at the time.

Africatown members said their group is nonviolent, and two of the men who were arrested in the building on Tuesday said they were running a small radio station from the building and making posters there when police came. arrival.

â€œWe were making signs that said ‘Decolonize the apartheid curriculum’ when all of a sudden we heard loud banging. I opened the window and saw five policemen pointing guns at my face, â€Tahir said.

More4Mann, a group of activists who support Africatown, said the police presence to extract the four men could be called upon “excessive,” and that the police “smashed down the doors with rams and climbed up through the roof hatches.”

Lewis said officers did not have a search warrant or probable cause. Jameson said they didn’t need a warrant because the owner of the building, SPS, had called the police to evict the men.

Lewis and Tahir said they are looking for another building because the proposed replacement SPS is not in the same area and is more expensive.

Tahir said it is important that they succeed in their mission.

â€œSchools must stop teaching black children lies; they don’t feel good about going to school and are pushed down the pipeline from school to prison, â€Tahir said. â€œHow can you tell black kids that Jefferson and Washington are their heroes?â€ He said, adding that Washington was a slave owner. Washington had owned 318 slaves, which he published in his will upon his death.

Tahir said his organization believes the program should be career-oriented, so graduates can find jobs in a tough economy – instead of having to depend on what he called “egalitarian employment” on traffic. drug on the street.

â€œYou can lose money and get it back, but you will never get the time back,â€ he said. “And these kids are running out of time.”