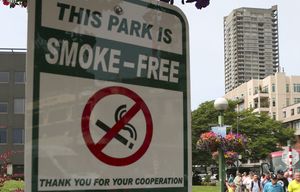 The smoking ban in all public parks in Seattle began on Monday, but it could take time to enforce.

The first day of Seattle’s public park smoking ban looked like any other: People continued to light up at Victor Steinbrueck Park near Pike Place Market, ignoring the sign asking them not to do it.

Some were unaware the ban went into effect on Monday. Others were skeptical of its effectiveness.

“It will work for a minute, but it won’t stop smokers from entering,” said Sly Sahme, 49, who has been sitting in Steinbrueck Park and smokes occasionally.

Smoking is now officially banned in Seattle parks, although the app can be time consuming and the consequences are little more than a slap on the wrist.

About seven or eight park rangers – along with police officers – are tasked with enforcing the ban. Park rangers are focusing on downtown parks and Cal Anderson Park on Capitol Hill for budgetary reasons. They patrol there daily, but due to the size of the parks, it may take some time for them to see the smokers and explain the rules, Seattle Parks and Recreation spokesperson David Takami said.

Smokers could receive reminders, verbal warnings or written warnings in the event of an intrusion, all without fines or tickets. The aim is to remind the public of the ban and to educate people about the health risks of smoking, Takami said.

The Seattle Council of Parks Commissioners approved the ban in May, a proposal led by the mayor’s administration to extend restrictions on smoking, chewing and other tobacco within 25 feet of park visitors.

The ban follows similar efforts in other cities, including New York, Boston and Chicago, although smoking bans in those cities include fines for violation. The parks department decided not to impose fines after organizations said the ban would disproportionately target homeless people.

Aaron Coito, 33, said that although he does not smoke often, he is against the ban and sees it as government overtaking.

â€œWe’re getting into Seattle’s nanny society a bit,â€ he said, as he sat on a bench in Denny Park.

Denise Gillman, 50, of Seattle, said she is allergic to cigarette smoke – a puff on the face can end with a trip to the hospital. She said she thinks the ban will be a good thing, as long as people cooperate.

The department expects most people to follow the rule with reminders or verbal warnings, but in the extremely rare case of two written warnings, an arrest could result, Takami said. When the ban was considered in April, there had been no written citation of smoking under the 2010 rule.

Kyle Hanson, 24, of Tacoma, smoked a cigarette near the fountain in Westlake Park on Monday. He said that in grassy parks – perfect for “sitting in the shade, enjoying a cigarette” – he would like designated smoking sections.

Randy Andrews, 52, hadn’t been in Steinbrueck Park for a very long time on Monday, but had yet to see any enforcement of the smoking ban. He has been smoking and coming to the park for decades.