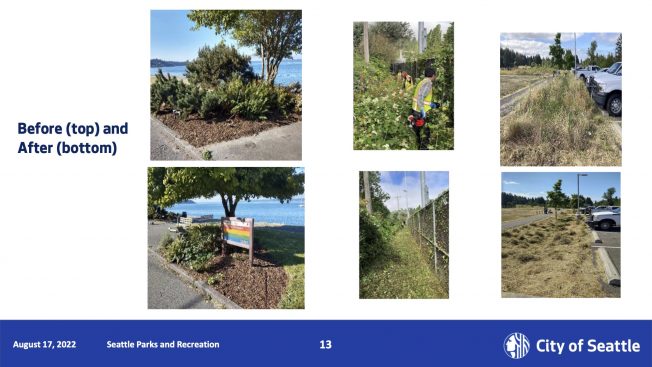 We have already spoken of Seattle Parks‘ recent maintenance issues – including this report from the Alki Community Council‘s June meeting. This afternoon, park managers told city council Public Property and Homelessness Committee that they’ve caught up via what they call a “maintenance push.” This was Parks’ first of two presentations to the committee, and you can watch the 48-minute video recording of the meeting:

Their priorities so far have been mowing, maintenance of sanitary blocks (stand-alone toilets), graffiti removal and garbage collection. Staff were one of the main reasons they fell behind, parks officials told council members, but other challenges also hampered their work – like 21 rainy days in May and 19 days rain in June. They couldn’t do anything about the weather, but they worked on hiring, starting the year with over 80 jobs in the maintenance division, filling 50 of those positions by July and expecting to fill 10 more this month. In the first month of the “push”, for example, they spent 688 hours removing graffiti, nearly 50% more than the same month last year. During the same month, they collected 330 tonnes of waste from the parks, compared to 270 tonnes a year earlier. As they catch up in these areas, the next level of priorities includes cleaning sports fields. Here’s the slideshow with all the numbers they shared.

After that, the park managers continued with their second presentation, on the 129 “comfort stations” around the system. Unlike the presentation on maintenance, this one had a bottom line – the department is looking for more Parks District financing to expedite replacements and cover repairs required by damage. Currently, toilet blocks are replaced on average every 42 years; if the current annual budget of $1.6 million is increased to $2.8 million, this could fall every 34 years. The additional funding recommendation also includes half a million dollars to cover arson and vandalism. Between that and maintenance/repair needs, they respond to about 1,400 work orders a year, council members were told. The average reconstruction of a toilet block costs $540,000, Parks said. (The one that opened late last year at 57th/Alki cost $638,000 to build.) Asked how many others need to be replaced, the acting superintendent Christopher Williams replied, “Most. A list of “priority” projects presented at the meeting (here is the full slide deck) included two in West Seattle – Lincoln Park from the paddling pool/north playground and Westcrest Parkon the south side, Parks also says he is working on a system to remotely lock and unlock toilet blocks to improve efficiency.

The Seattle Parks District Board is planning a parks tax of $108 million; would…